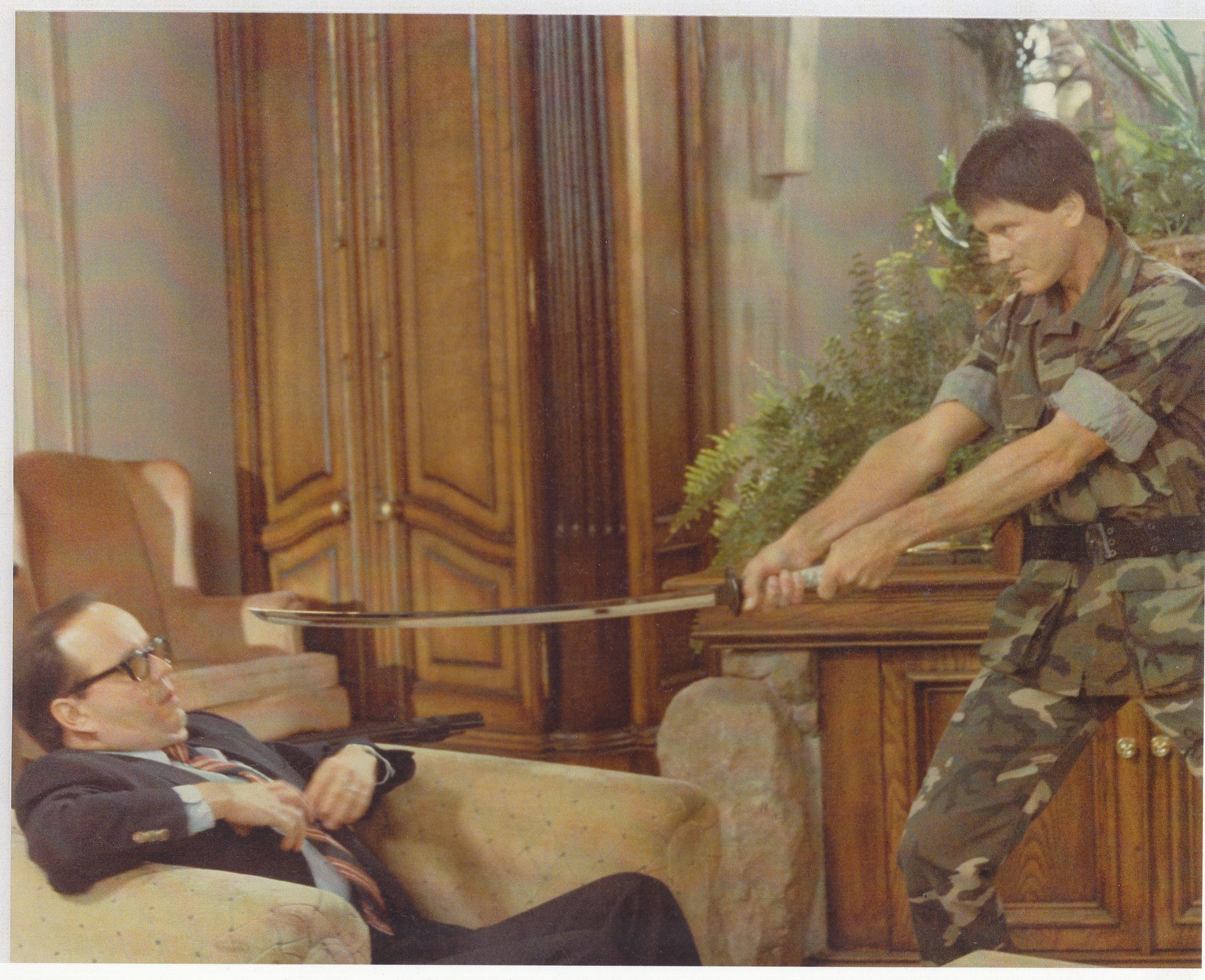 A Japanese policeman in Los Angeles uses an ancient magic sword to battle killers and an extortion ring.

I admit to never never having previously heard of the film in question and came across it merely by chance one day. However, seeing as it was at such a give away price, I thought 'What the hell' and throwing caution to the wind, bought it.

And how glad I am that I did!

It's a B-movie all the way (as expected) but unlike many of its ilk, it KNOWS it and even revels in it.

Aside from teaching self defence to American police officers our hero likes nothing better than a bit of dirt biking and it is whilst having a breather from this activity off the beaten track as it were, that he spies another Japanese man battling off some American mercenary sorts with a samurai sword.

This sword is no ordinary sword however....for it was fashioned by Buddhist monks from a lump of space debris that fell from the heavens 400 years previously and possesses certain magical properties. Not only that but as it happens - and the reason for the military guys special interest in it, is that an incriminating microfilm has recently been planted in its handle by a corrupt police officer who, aided by a sadistic trained killer, has amassed himself a small army of loyal martial art/military experts.

As you can probably guess, possession of the sword ends up in Tadashi's hands who then inevitably becomes the target.

Cue lots of martial arts action as our hero fights off all those who wish to retrieve the sword for their own nefarious ends.

There's a lot to like about this little known film, not least of all some good martial arts displays - especially at the films climax when our hero comes up against various attackers armed with a big array of martial arts weaponry such as balisong knives, kama (sickles), sai (pronged truncheons), staffs, machetes etc.

Also of interest to martial arts fans is the appearance of Bill 'Superfoot' Wallace who has a very small but nonetheless welcome role and gets to (briefly) show off some of his legendary left foot work.

One of the main plus points for me though, were some of the humorous scenes throughout this. For instance there's one particularly funny scene in which our hero actually dresses up as a woman to lure one of the films bad guys! Tadashi Yamashita must have a good sense of humour!

And how can you not love a film that contains scenes such as when the same bad guy hurls a nun in a wheelchair over a cliff whilst Bach's Toccata and Fugue in D Minor plays on the soundtrack?!?!?!?!?

Yep - another B-movie classic me thinks! Well worth a watch if you're lucky enough to get hold of a copy. When a meteor crashes to earth in the ancient past, Japanese monks use it to fashion a magical, glowing sword. Now, in present-day Los Angeles, a cop named Tadashi (Yamashita) and his very Irish partner Patrick (Gibson) are fighting not only police corruption, a sadistic pimp named Cain (Randazzo) and a paramilitary group led by camp commander Dirk St. John (Novak), but Tadashi agrees to try and find the missing sword and return it back to its rightful owner, because it has been in his family for centuries. Not only that, but the daughter of the sword's owner, Satoko (Mika), has been kidnapped. It sure looks like there's a lot on Patrick and Tadashi's plate, but luckily Tadashi "Is the best the Japanese have to offer" and he can "handle any weapon ever made". Does that include the...SWORD OF HEAVEN? We absolutely loved Sword of Heaven. It has that funny, insane, yet unwittingly (?) wacky sensibility we enjoy so much. It has one of the best openings we've seen in a while, as Tadashi tears around the desert, popping wheelies on his motorbike - this after we actually see the materials for the sword coming out of space hundreds of years ago! The music that accompanies these scenes and many others is triumphant and Superman-like, and the rest of the score is extremely catchy as well. There's even a song during a chase that sounds a LOT like ZZ Top's "Legs". The music, like the movie itself, is upbeat and fast paced.

While it may seem impressive that genre stalwarts Karen Sheperd, Bill "Superfoot" Wallace and Gerald Okamura have joined Tadashi, you truly haven't lived until you've seen Tadashi Yamashita - who looks like a Japanese Mitt Romney - executing his Martial Arts moves while (needlessly, which makes it funny) going undercover in a red dress. This when not on his awesome motorbike with a sword strapped to his back. His most noteworthy nemesis, in a movie full of them, is Joe Randazzo as Cain. He wears one glove like Michael Jackson and puts in an over-the-top, bonkers performance that on the John Miller scale of acting, rates about a 6.5 to a 7.

There's the token barfight (check out the pinball machines), absurd 80's insults are thrown around, and even though the kidnapped girl's name is Satoko, it REALLY sounds like all the characters are calling her "Sudoku". For half the movie we thought Tadashi really loved seeking out challenging number puzzles. But even though the movie is slathered in the loony goings-on you just have to love, there's plenty of great action and stunts as well, so the action side of our brains is fully satisfied. There's even a classic "hero goes in the woods and proceeds to kill goons" ending, each with different weaponry, which shows the movie's heart was in the right place all along.

During the infamous nightclub scene, a metal band is on stage called Ninja Warriors of Rock, playing a song called "War of Love". Released on VHS by TransWorld, do yourself a favor and see Sword of Heaven!